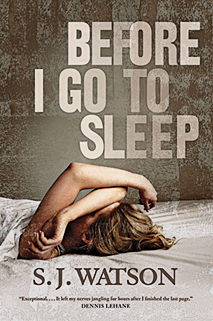 47 year-old Christine has lost her memory for twenty some years due to trauma. She wakes up every morning to a forgotten past. She spends her day piecing together a life, who and where she is, her personal history, and, who her husband Ben is. Upon the advice of Dr. Nash, she writes it all down in a journal before she goes to sleep at night, for she’ll wake up the next morning wiped clean of her day old memory once again.

The book deals with some interesting issues. If the past is horrible to recall, would it be better if one does not remember, or, would one be better off knowing the truth despite pain? Is one made more vulnerable by knowing or not knowing? Further, if mental images conjure up, how can one be sure they are memories of actual happenings and not one’s imagination?

Author S. J. Watson leads the reader into a maze of intrigues, teasing us with an unreliable narrator Christine, casting shadows of imminent dangers, and trying to capture us with her vulnerability. So memory loss is an effective plot device, keeping us in the dark guessing, creating suspense, and revealing ever so slowly what really had taken place that caused the amnesia to set in, and how she could ever escape.

The book starts off with a most interesting scenario as Christine wakes up to an unknown world, but towards the middle it seems like it has forgotten that it is just the protagonist who has amnesia, not the readers, as it repeats the facts and descriptions with Christine’s journal entries. The last part is a page-turning thriller, albeit with a relatively improbable ending. The last pages explaining everything with a neatly wrapped up ‘here you go, see how logical it is’ kind of finish.

Memories… such a thematic element can be exceptionally gratifying to explore with deeper characterization. Surely the author has brought up the idea that memory defines us, a reader seeking for a more contemplative rendering of such a concept would be disappointed however, for Watson has chosen to use this interesting thematic material to craft a suspense thriller and not an idea-driven literary work. So what we have with notions relating to memories, to the nature of our identity and personality… etc. are merely used to build up a suspenseful plot. As a thriller, the book aims to lead on and not delve in.

Am I being a bit harsh here? Why, I just caught myself. I could well have been more lenient if I were not reading it along with Proust’s In Search of Lost Time (Remembrance of Things Past). Am I being fair to make comparison? It’s like comparing apples with oranges. Yet the coincident is too fascinating… both deal with remembering and sleeping, albeit one trying to fall asleep while the other trying not to. Just thinking… even the book covers that I have are similar.

Lots of ‘I love you’s’ are uttered, but none that can stir up any emotions in me the reader. Several films kept conjuring up in my mind as I read… Memento, Eternal Sunshine of the Spotless Mind, The Vow, and I must say the latter two managed to stir some affective resonance in me while exploring the topic of amnesia and a love relationship. But with this book, I just wanted to race to the end. For some, this might well be proof of an entertaining read.

And that is why I have high hopes for its film adaptation. Yes, I must applaud Watson for his strong debut. This novel published in 2011 has gained awards and accolades, on the bestseller lists in several countries, and translated into 30 plus languages. Its film rights has been snatched up by Ridley Scott. Filming now, it features the impressive cast of Nicole Kidman as Christine, Colin Firth (The King’s Speech) as Ben, and Mark Strong (Zero Dark Thirty) as Dr. Nash; Anne-Marie Duff (Nowhere Boy) is also on board. This is definitely a film I want to watch, not just because of the actors, but the screenwriter Rowan Joffe, who will direct as well. Joffe has shown us, with his script for The American (George Clooney stars) that yes, sometimes the film can be better than the book. Let’s hope this is also the case.

In the end page Watson notes that his novel, though totally fictitious, is inspired by actual medical cases, particularly that of Clive Wearing‘s, the British musicologist, conductor and BBC music producer, who has the same condition as Christine’s, albeit his is an even shorter memory span, just a short minute or so. His real life accounts have been recorded by his loving wife Deborah Wearing in her book Forever Today: A Memoir of Love and Amnesia. While he lives in the constantly present, he does not forget music or his love for his wife. Now that would be one inspiring book to read.

Click here to watch a short clip on Clive and Deborah Wearing on YouTube. Does he not remind you of another real life character, a pianist, whose life had also been made into a movie?