I arrived London Gatwick Airport around noon. Found my way to the shuttle taking me from the North to the South Terminal to catch the Gatwick Express heading for central London. Once on the train, it was a smooth and fast ride, just 30 minutes and I was at Victoria Station. My cousin was already waiting for me there to begin our 5-day escapade. After settling into our lodging it was already mid-afternoon. What to do with just a half day in London?

We decided to take the Tube and head to Leicester Square to check out bargain tickets for the shows that evening. We had nothing planned, no agenda, and in no hurry… for a change. And that’s what I call a holiday.

Leicester Square is the place for buying cheap same day theatre tickets. We had nothing in mind. We stopped by several ticket booths and nothing really piqued our common interest. Several we’d seen; the one  I’d really wanted to see before wasn’t on anymore, and that’s Skylight with Carey Mulligan and Bill Nighy. I came to the West End two years late.

Then we turned into Shaftesbury Avenue, and we knew what to see: The Go-Between at the Apollo Theatre. My cousin wanted to see Michael Crawford—the original Phantom—without the mask, albeit thirty years older, and I wanted to see the stage musical adaptation of L. P. Hartley’s famous novel. That scene in the movie with Julie Christie and Alan Bates rolling on the haystack in the barn emerged in my mind. Wow, that was some longterm memory. That’s a 1971 movie.

We quickly walked back to the Square to find the TKTS ticket booth. Why the TKTS? It’s the official London theatre ticket booth, operated by the Society of London Theatre with all profits going to support the theatre industry. I was delighted to be able to get two very good seats, dress circle centre, at 70% off, £25 each. 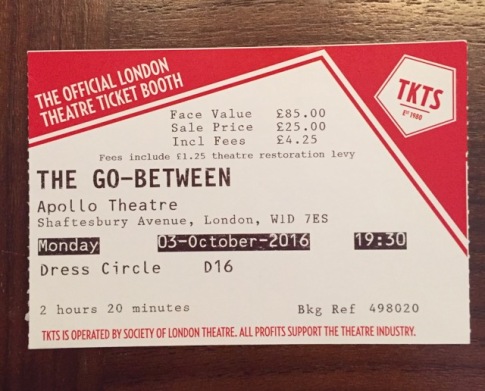 We still had about two hours before the 7:30 pm show began, so into near-by Chinatown we went. I saw tourists taking pictures of the BBQ ducks hanging inside the windows of eateries. No, I’d never thought of photographing ducks other than with them swimming on the pond. Anyway, that’s what I had for dinner. A bowl of noodles with two kinds of BBQ meats, duck and pork, only £6.50, a very good price I think.

The Apollo Theatre opened in 1901, a month after the death of Queen Victoria, making it the first Edwardian theatre to open in London. It was already dark when we got to the doors so I didn’t have a good view of the architecture. But once inside, I was mesmerized by the beauty of its historic glamour.

On the stage you see a chest, the centrepiece. Instead of a red box that stores mementos and a diary as in the novel, the playwright had turned it into a large chest, which is appropriate, for we see the boys Leo and Marcus step on it as they sing. The same with the chairs, they’re for standing on.

When Leo Colston (Michael Crawford) in his old age opens up the memory chest, his past as a youngster acting as a go-between for two secret lovers of different classes rises up to haunt him. The time is the turn of the twentieth century, in a setting like Downton Abbey. Come to think of it, Downton has a much more progressive outcome, chauffeur Tom can have Lady Sybil, but not farmer Ted and Lady Trimingham, Marian.

The Go-Between is a musical, but not your spectacles like The Phantom of the Opera, Les Miserables, or The Lion King. It’s a chamber work, small scale, and drawing you into the story more readily rather than showing off grandeur and technicalities. Richard Taylor’s music, however, may not be as readily inviting as the popular tunes from those larger productions. With only a piano as accompaniment, the characters at times sing a cappella, and at times in dissonant chords. Michael Crawford, 74, loved it, but indicated in an interview that the music had been technically demanding.

What did I get from the show? The book’s famous intro line sure hits home:

“The past is a foreign country: they do things differently there.”

That says about my early days as a teenaged cinephile, and actually just arrived Canada from a foreign country. Going to see The Go-Between movie in the cinema was itself a coming-of-age episode for me. I remember that was a more ‘mature’ film than this musical play, or is it because I was just a tender lass. No matter, now, I should get hold of the novel. I’ve never read it.

Only a few hours in London and it already felt like a full day. Four more to go.