Three Billboards outside Ebbing, Missouri is a ‘Coen-esque’ feature with Fargo (1996) star Frances McDormand. This might well be one of the better Brit-U.S. collaborations in recent, tumultuous years. And McDormand just might head to another Best Actress Oscar win after Fargo.

Caution: The following discussion involves a minor spoiler. Not so much a spoiler in plot but in idea. I can’t be more obscure in reviewing the film if I’m to delve into meaning.

In British writer/director Martin McDonagh’s debut feature In Bruges (2008), the main character, a hitman, Ken (Brendan Gleeson), explains to his angry crime boss Harry (Ralph Fiennes) why he didn’t kill his young protégé Ray (Colin Farrell) as Harry had ordered, saying: “He has the capacity to change. We all have the capacity to change.”

Three Billboards outside Ebbing, Missouri is McDonagh’s damatization of this pivotal idea in full force: We all have the capacity to change. Viewers may not like the characters or their speech, but the dark comedy leads us to the point where we’ll find it worthwhile to hold our judgment, no matter how despicable they behave or speak. And that is the main reason for the gratifying ending of Three Billboards: Change. A change from distraught to calmness, from tension to release. 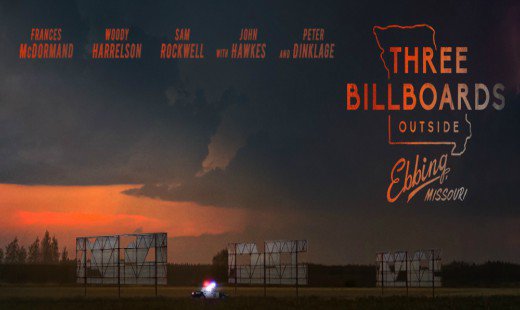 Indeed, language is the spoken expression, the tip of the iceberg. What lies beneath and beyond language is the essence of a character. McDonagh’s script is starkly effective in presenting the different sides of his characters. Not that we should make excuses for their wrongs, but that everyone has a backstory and a present reality to deal with.

Mildred Hayes (Frances McDormand) has lost her teenage daughter Angela (Kathryn Newton) to a most violent, horrific crime, ‘raped while dying’. She is frustrated by the inability of the police to bring in any arrests. The three billboards she pays for outside Ebbing, Missouri advertise to the world her rage, targeting police chief Willoughby (Woody Harrelson). It’s her intention that the publicity they draw could lead to some effective police actions.

McDonagh is apt to instil humour into the sombre subject matter. The dialogues are sharp and the actors deliver. Call it a dramedy if you will, but the spontaneous laughters generated in the theatre are bittersweet, for they are acerbic depiction of racism, injustice, and the grieving rage of the unconsoled.

The three billboards pit Mildred against the town except for her co-worker Denise (Amanda Warren) in the gift shop and an admirer James (Peter Dinklage) in the bar. Her action has put her otherwise devoted son Robbie (Lucas Hedges) in an awkward position in school and inflamed her ex Charlie (John Hawkes), whose 19 year-old girlfriend Penelope (Samara Weaving) is totally oblivious to what’s going on in town. Dixon (Sam Rockwell) from the police station shows his utter disgust with unchecked impulses.

While the ensemble cast deserves kudos, the pivotal acts fall on three characters. Their superb performance augments the incisive and thoughtful script.

McDonagh wrote the role of Mildred Hayes with Frances McDormand in mind, and she delivers with a punch. Her actions as an angry and helpless mother is stark and brutish, but McDonagh also shows us her vulnerable side, a mother who is regretful of the argument she’d had with her daughter on that fateful day, mournful for a daughter who’d never come home, and embittered by the ineptness on the part of the police. McDormand indwells her role so effectively that she makes me see only the angry Mildred, and totally forget the pregnant, innocent police woman in Fargo.

Sam Rockwell’s dimwitted, racist Dixon stirs up non-stop laughs in the theatre. His ultimate change is the powerful force that makes the latter half of the story so gratifying.  Rockwell’s performance is spot-on. McDonagh wants us to have a last laugh on him too: Dixon’s heart may have melted by some kind, motivating words from chief Willoughby, but his intellect remains intact.

Woody Harrelson plays Chief Willoughby with a heart. He is a tough police chief and yet underneath is a kind man, a loving husband to his wife Anne (Abbie Cornish) and a devoted father to his two young girls. Furthermore, Mildred is not the only one bearing life’s harsh blows. While Mildred reacts with rage, Willoughby deals with repressed fears.

A few kind words can cause immense change. And when one person changes, the ripple effects are contagious. The latter part of the film with its twists and turns slowly reveal how positive changes ripple on. For often underneath the hard surface lies a moldable heart. I particularly appreciate the audacity of McDonagh’s writing. Among the tough and macho, love is noted as the key to hold up oneself as love leads to calmness, and calmness to thoughtful actions.

Tying up the emotional bond is the music, in particular, the Irish folk song “The Last Rose of Summer”. Thomas Moore’s lyrics and the soft yearning of Renée Fleming’s voice sings out the sad tune in Mildred’s heart, a cry for justice and the dispelling of emptiness and loss. In the opening scene, the song introduces us to the three billboards as Mildred drives by and contemplates her vengeful scheme, the song reprises as vengeance engulfs a distraught heart and leads to a violent act. Ironically, that scene becomes a pivotal turnaround for Dixon in the police station.

‘Tis the last rose of summer left blooming alone
All her lovely companions are faded and gone
No flower of her kindred, no rosebud is nigh
To reflect back her blushes and give sigh for sigh

The juxtaposition of a quiet Irish folk tune with a fictional, small American town dealing with the fallouts of a horrific, unsolved crime may sound incompatible, but it’s poignant and effective here.

Old loves are irreplaceable, yet regrets cannot heal deep wounds. Lovely companions may have faded, but new ones can be forged, albeit not the same nature, but there’s  hope for new bonds. The last rose of summer dissolves to the first red leaf of fall. It could still be a beautiful season.