The Portrait of a Lady by Henry James

First, thanks to Bellezza’s open invite to a read-along, posting the photo of John Banville’s newest book Mrs. Osmond, a sequel to The Portrait of a Lady by Henry James. I’d seen the 1996 movie adaptation directed by Jane Campion (The Piano, 1993), but had never read James’s novel. What better time to read both books than now.

I got hold of The Portrait of a Lady (Modern Library, just love the cover) read part of it then turned to a sound recording (unfortunately couldn’t find the Juliet Stevenson narrated version). Prompted by JoAnn, I interspersed reading with listening and gleaned much pleasure doing that. Here’s my very short, 5-Star Goodreads review:

“Actually I was listening to the Blackstone Audio version of the book as well as reading  parts of the book to ascertain facts in the story or just savour the passages again. James’s portrait of Isabel Archer is one of the saddest fictional heroines I’ve come across. A reminiscence of Anna Karenina emerged as I read the latter part, but Isabel is a character much more likeable for me. Should she be destined to a ruined life due to a naive misjudgement, ok, maybe even foolishness, by marrying Gilbert Osmond? Osmond is evil personified, and I just can’t shake off the face of John Malkovich (from the movie) whenever I read about his cold, domineering hand over Isabel. Isabel definitely needs redemption and saving grace. So I do hope John Banville’s Mrs. Osmond will grant her that.”

The Portrait of a Lady by Jane Campion

Since the image of John Malkovich kept creeping up my mind as I read the book, I quickly turned to the movie adaptation right after I finished the book. I remember I was most disturbed by Osmond’s callous treatment of Isabel when I first watched it years ago; he appeared as a chilling, silent villain, bullying his innocent victim mercilessly. His stepping on Isabel’s floor-length dress to stop her from walking away was still vivid in my mind.

Now as I saw the movie again, I find the feature more style than content. The tilted camera shots? A bit contrived. Malkovich is still evil, and Kidman still the innocent victim, but there isn’t much complexity in the characterization. The editing and much abridged dialogues leave a vacuum. Considering the rich descriptive prowess of Henry James, much is left to be desired in the film. Yes, I’m one who advocates for the appreciation of books and films as two different art forms, and should not be doing a literal comparison when judging the adaptation. Well, I’m not. I’m weighing the film on its own merits. Yes, set design is rich and some artistic shots, but overall pales despite the sumptuous colours. And, what happened to Nicole Kidman’s hair? As much as I’d appreciated Campion’s works, especially her Oscar winning (Best Original Screenplay) film The Piano, I do feel maybe it’s a good time to do a remake of The Portrait of a Lady.

After the movie I turned right away to Banville’s book. Here’s my review on Goodreads: 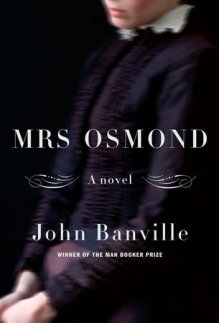 “I jumped to this book right after reading Henry James’s The Portrait of a Lady. As I understand this new work of Banville’s to be a ‘sequel’ to James’s book, I had high expectations of the Booker winning author carrying Isabel Archer’s (Mrs. Osmond’s) story forward, taking her through twists and turns and eventually letting her find redemption and a new life. However this was not to be exactly as I’d envisioned.

Mrs. Osmond is divided into two Parts. Maybe for the benefit of those who haven’t read or reread The Portrait of a Lady in preparation for his book, Banville retells James’s story in Part I. While he’s very detailed in his descriptive style, and to his credit, creeping inside the minds of his characters, he repeats himself frequently in reminding his readers how Isabel Archer got deceived by Madame Merle and fell into the marriage trap of Gilbert Osmond’s. So basically the story remains static throughout Part I.

(Spoiler Alert in the following)

Part II leads us to Isabel’s own scheme of turning the tables on Osmond and Merle, and let them have a taste of their own medicine by just transferring the ownership of her residence the palazzo in Rome over to Madame M. and let the culprits be trapped with each other. That’s all there is to her plan, and it’s an expensive vengeance. As for her own dear life and its purpose for the remains of her days, the path is as obscure as before, albeit Banville has dropped a hint of the suffrage movement being a meaningful direction.

While Mrs. Osmond may not be as gratifying as I’d expected, this is an interesting concept, taking literary classics and imagining a sequel. Now that could lead to a brave new genre of fiction writing.”

A Movie Remake, anyone?

If there’s one, who’d you like to see playing the role of Isabel Archer? Gilbert Osmond? Madame Merle? Director?

Can a movie adaptation ever be as good as the book?