“The Rider” opens this weekend in selective cities. If it’s screening in your area, don’t miss it. 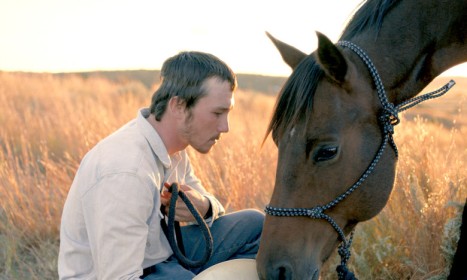 What is a cowboy to do if he cannot live the cowboy life again? Too remote? Substitute ‘cowboy’ with any other activities you love to do, or a role that defines you. Take that away, and what do you have left?

The film focuses on the struggles of a rodeo star and expert horse trainer Brady Blackburn as he rebuilds his life and identity after a severe head injury. Upon the prognosis of his doctor, Brady should never go back to riding and rodeo again, for another injury would be fatal.

“The Rider” is an American feature, unique in its subject matter while its director is an unlikely candidate to share the insight. Chloé Zhao was born in Beijing, had studied in London, then Massachusetts and New York. “The Rider” is her second feature. In her short directorial career, she has gone to Cannes twice, nominated in 2015 for the Caméra d’Or (“Golden Camera”), Cannes’ award for the best first feature film, and winning The CICAE Art Cinema Award in 2017 with “The Rider”. That is, among other international accolades. Zhao is an exemplar of a global citizen in filmmaking.

The actors for “The Rider” exude authenticity, for they are actual cowboys and their family, all playing themselves. Brady Jandreau takes the role of Brady Blackburn, reflecting his real-life persona, a cowboy who is much admired and respected in the rodeo community. His father Tim and sister Lily form the Blackburn family in the film. Zhao’s directorial skills shine forth as she leads the non-actors in front of the camera, capturing them in their natural speech and actions, in particular, offering viewers realistically the dexterity involved in the wrangling work. But the film goes much deeper than the actions.

Recovering from the near-fatal injury pits Brady into a precarious existence and conflicting relationship with his father Wayne (Tim Jandreau). As a tough cowboy himself, Wayne had all along brought Brady up to be resilient and competitive, but now father had to dissuade son from the risky pursuit of bronco riding and rodeo activities. Nursing a wounded body and a tormented mind, Brady has to deal with the painful task of redefining himself. Temporarily working in a supermarket and wearing a store uniform makes Brady a displaced person, a persona out of meaningful context, both to himself and to those who recognize him as they come into the store.

While there are tense undercurrents with his dad, Brady cherishes the intimate bond with his sister Lily (Lily Jandreau), who expresses herself from her own peculiar, internal world. Kudos to Zhao for casting the real-life brother and sister in the film, they need not be experienced actors to conjure up some genuine, moving scenes.

Much of the film’s effectiveness goes to the inspiring cinematography, exposing quietly Brady’s tormented soul. The opening sequence sets the stage right away with riveting close-ups of a horse and its breathing. As the camera turns from beast to man, we see the extent of the injury Brady sustains as he gets out of bed and follows the routine needed to care for his own body, striving to return to a past life and regain some sense of normalcy.

In other sections of the film, the camera pans the vast landscape of the South Dakotan plains with a tiny figure that is Brady walking or riding through. “The Rider” is visual poetry on a subject that is seldom explored, and cinematographer Joshua James Richards is most effective in transposing Brady’s internal quest lyrically on screen: “A horse’s purpose is to run in the prairies; a cowboy’s is to ride.”

Brady’s good friend Lane Scott (Lane Scott) is a painful reminder of the risks a cowboy takes. Paralyzed and brain damaged after a fall in a rodeo event, Scott now communicates barely by spelling out words one letter at a time signing with his fingers. Poignantly, Zhao depicts Brady’s every visit with Lane in the hospital as an encounter of love and hope without sentimentality.

Zhao is nuanced and eloquent in creating impressionistic scenes. And when horse and man are juxtaposed in such intimacy, the parallel is striking. As Brady puts it, when a horse is badly hurt it has to be put down, that is the humane thing to do; when a cowboy is badly hurt, he has to continue to live, for that is what humans are supposed to do. As we come to the turning point of the film towards the end, the presence of family love and support appear to be the key to moving on.

A rare gem of a film. Watch it with a quiet heart.

10 thoughts on “‘The Rider’ is Poetry on Screen”