A Korean director shooting a film while attending the Cannes Film Festival, with two prominent Korean and French actors in his cast, taking just days in shooting to make what seems like a spontaneous gig had resulted in this whimsical 69-minute dramedy. Looks like something only the prolific, Cannes-honored director Hong Sangsoo can pull off. The versatile Isabelle Huppert (Things to Come, Elle) in one of her interviews said it took her only five days to do Claire’s Camera with Hong, with no script, except a daily run-through of the day’s story and lines. 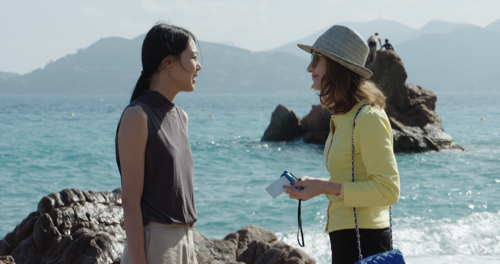 This is Huppert’s second time collaborating with Hong. The parallels in Claire’s Camera with real life are the very elements that lends to the film’s subtle humour. Claire (Huppert) is a school teacher from Paris visiting Cannes for the first time, accompanying a friend to the Film Festival. While wandering alone in this seaside resort taking pictures with her camera, Claire bumps into a triangle entanglement: a Korean director So (Jung Jinyoung), his film’s sales rep Yanghye (Chang Mihee) who has more than just a business relationship with So, and separately, her sales assistant Manhee (played by Hong’s muse Kim Minhee, On the Beach at Night Alone), whom she fires as she finds out Manhee’s one-night stand with the director.

Claire makes fast friends with Manhee after they meet on the beach. Here we see two actors from different countries using English to communicate, a language that’s not their own mother tongue. The verbal limitations may be a bother for some watching the film, but apparently not a hindrance for the two of them striking up an instant, equal friendship. They seem to know what the other is trying to say, and they care to ask each other questions, some quite personal, in order to know the other more.

Contrast that to a conversation where Manhee has with her boss Yanghye over coffee when she gets the message that she’s fired. They share the same Korean language, yet their interlocution is marked by unspoken sentiments and the boss’s minimal attempt to make it a two-way flow. Here’s a realistic depiction of a lopsided communication, one that’s not exclusive to the Korean culture. Those in authority hold the key to conversations.

In another scene, the lack of communication is what makes the naturalistic, deadpan humor work. When Claire first meets director So, the two are sitting at adjacent tables outside a café. As conversation begins, So asks Claire if he can sit with her at her table. She agrees and he stands up and moves to sit by her. But then the two have nothing more to say to each other, maybe due to language limitations. Claire then goes on to Google him on her phone to find out more about this director who’s sitting beside her. One has to take this as a comedic scene to appreciate the irony.

The film is breezy and leisurely as the Cannes seaside, refreshing as the yellow jacket Claire is wearing; incidentally, her ‘costume’ is the actual wardrobe Huppert had brought when she was attending Cannes at that time. The setting is scenic and pleasant, whether it’s the pounding waves or the small lanes winding along cafes. No, we don’t get to see the red carpet or any of the glamour of the Cannes Film Festival, but we’re led into the side streets of storytelling.

The pitfall for those not familiar with Hong’s eccentric style could be the naturalistic, seemingly unscripted demeanours of his actors and their haphazard dialogues, and in this case especially sound laboured when characters try to interact with each other in a foreign language. And speaking of communication, the usual hard-drinking of his characters—director So here—could well be a language of expression in itself.

As for the camera Claire is always carrying, one would wish Hong could have used that a bit more, cinematically and imbued with deeper meaning. Hers is a Polaroid, so the image appears slowly on a hard copy. But we don’t get to see this effect or be led to any deeper relevance. However, in one notable dialogue towards the end when Manhee finally asks Claire a question that must have been on her mind all along, we finally hear something revealing:

Manhee: Why do you take pictures?

Claire: Because the only way to change things is to look at everything again very slowly.

The unfinished part seems to be, “but do we do it?”

Considering Hong Sangsoo’s signature style of repeating his film sequences in a movie like we’re watching it all over again but towards different results, Claire’s words could be more layered than they appear, and the slow appearing of an image on the Polaroid print could well be a mirroring for reflection.

Premiered at the Cannes Film Festival in May, 2017, Claire’s Camera has since been playing in film festivals all over the world. Cinema Guild will be releasing the film on Blu-Ray and DVD beginning Nov. 6, 2018. For more details click here: http://www.cinemaguild.com/theatrical/clairescamera.html

Let Things to Come be a Cooling Respite

‘The Day After’ is a re-enactment Hong Sang-soo Style