When I first learned that Maria Semple’s quirky and clever 2012 novel would be turned into a movie, I had that umm… feeling. When I found out Richard Linklater would be directing it, it turned into a whaaat? Sure it’s not a Wes Anderson project?

On the surface a mother-daughter relational story, Semple’s book is deceivingly simple. Underneath the humour is her take on contemporary American society, the tyranny of technology, vulnerability of the non-conforming, sarcasm on the upwardly aspiring middle class, the rat race and its effect on parenting, the outsourcing economy, and even taking a jab on America’s quiet and polite neighbour to the north. As a target, I must give you the following excerpt from the book as evidence of Semple’s spikiness (or is it spunkiness):

Americans are pushy, obnoxious, neurotic, crass… Canadians are none of that. The way you might fear a cow sitting down in the middle of the street during rush hour, that’s how I fear Canadians. To Canadians, everyone is equal. Joni Mitchell is interchangeable with a secretary at open-mic night. Frank Gehry is no greater than a hack pumping out McMansions on AutoCAD. John Candy is no funnier than Uncle Lou when he gets a couple of beers in him. No wonder the only Canadians anyone’s ever heard of are the ones who have gotten the hell out. Anyone with talent who stayed would be flattened under an avalanche of equality. The thing Canadians don’t understand is that some people are extraordinary and should be treated as such.

But that’s not in the movie. Why, the movie is a total stripped-down version without the incendiary, sarcastic swipes, or the laugh-out-loud funny, and ah… thanks, Maria Semple, for the words, “it’s flattened under an avalanche of” smoothened edges in characterization and plot.

By the way, if one reads deeper into the Canadian jab quoted above, it wouldn’t be hard to see the layered meaning. Aha, the joke is on which side of the 49th? 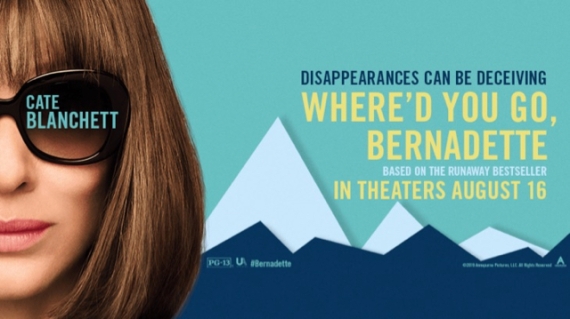 Bernadette Fox (Cate Blanchett) has had her glorious days as an acclaimed architect, pioneer of the green building movement, a MacArthur grant recipient at 32, and a young woman succeeding in a male-dominated profession. Due to an unfortunate incident, her award-winning project was demolished without her knowledge, destroyed by a vengeful neighbour who bought it under an agent’s name. Devastated, Bernadette crashed out of her career, moved to Seattle with her Microsoft, TED Talking husband Elgie (Billy Crudup, a miscast). They bought a huge, dilapidated mansion. For twenty years she had ignored the maintenance of her home and self. The traumatic health issue of her daughter Bee’s (Emma Nelson) early years drives her further into the hole living as a reclusive agoraphobic.

Bernadette and Bee are the best of friends though. Mother/daughter relationship is well portrayed in the movie, a particular gripping scene is their singing the song ‘Time after time’ together in the car ending with a Bernadette meltdown. “You don’t know how hard it is for me.” Bee doesn’t know, viewers need to guess, but readers do, for they are supplied with ample back story. The movie, however, has trouble connecting the past with the present, or presenting sufficient motivation for the actions and behaviour of the characters.

As loving parents, Bernadette and Elgie have to fulfill a promise to Bee, that is she can have anything she asks for if she gets straight A’s; now they’re stuck with making a family trip to Antarctica. For two-third of the movie we see mostly interior shots of home and work building up a case to Bernadette’s disappearance. The momentum picks up only in the last third, the Antarctica episode.

The storytelling in the book is a lively collection of emails, notes, letters, hospital billing, and police report plus personal narrative to present the different voices from various characters. On screen, the Rashomon-like shifting of perspectives are converted into mainly two characters sitting and talking to each other. Surely Linklater is an expert in dialogues with his Before trilogy, where the camera follows two characters Jesse (Ethan Hawke) and Céline (Julie Delpy) talking throughout the movie and yet still captivating viewers as we watch them wander the streets and listening to them chat. But here, that magic is missing. Where’d you go, Linklater?

For the casting of Bernadette, Cate Blanchett is a good choice, her Academy Award winning role in Blue Jasmine comes to mind. Unfortunately, here she is not in her Jasmine form. The major issue is a weak script, hence the directing of it. The screenplay follows the book faithfully but in a minimal, abridged version. It begs the question: does a movie adaptation need to follow the source material to the dot? Here in this very different medium, dialogues are picked right out of the novel while the camera has not been fully utilized, nor any imaginative ingredients been added to the visual adaptation of this quirky and zesty book. Well, yes, it might have been faithful to the letter, but not the spirit.

The title question obviously doesn’t just mean the physical whereabouts of Bernadette but where her talent, creativity, and vitality for life have gone. There’s a scene with Bernadette meeting her previous mentor Paul Jellinek (Laurence Fishburne) who says it explicitly: “People like you must create. If you don’t, you become a menace to society.” Such is a thematic element that needs to be calved out more clearly, a talent caged in by her own disillusionment and her ultimate breakthrough. Don’t blame motherhood, and Bernadette doesn’t, for she sees a beautiful offspring flourishing in Bee. But is parenting a zero-sum game? The context and question should be handled with more depth and inner exploration. With not much contextual support, the case of a self-imposed, locked-up genius is left to the actor Blanchett to portray, and at times it seems forced.

Missing story elements cause lapses in the storytelling. Why does Audrey (Kristen Wiig), Bernadette’s neighbour and archenemy, suddenly becomes friend with her at the most critical moment? Or, during the mudslide, the camera hasn’t shown (without obstruction) what’s written on the sign, which has triggered much of the resentment between Audrey and Bernadette. Readers know, but not viewers if they have not read the source material.

At the end of the book there’s an “About the Author” page. Before writing fiction, Semple had written for the television shows Arrested Development, Mad About You, and Ellen. If one hadn’t known this tidbit already, a natural response would have been “no wonder!” It just points plainly to the ideal person who should have written the screenplay.

5 thoughts on “Where’d You Go, Bernadette: From Book to Screen”