From high art in the gallery (my last post) to street art, here catching the last chance for a Paris in July entry, I’m presenting the fascinating documentary, a road movie of making art in the open milieu of villages and among the working populace. Faces Places (2017) is an account of the venerable auteur of the Nouvelle Vague (The French New Wave: Goddard, Truffaut…) Agnès Varda (1928-2019), then at 89, going on a road trip with photographer and artist JR to scout for ordinary people to photograph in various obscure locales in France. 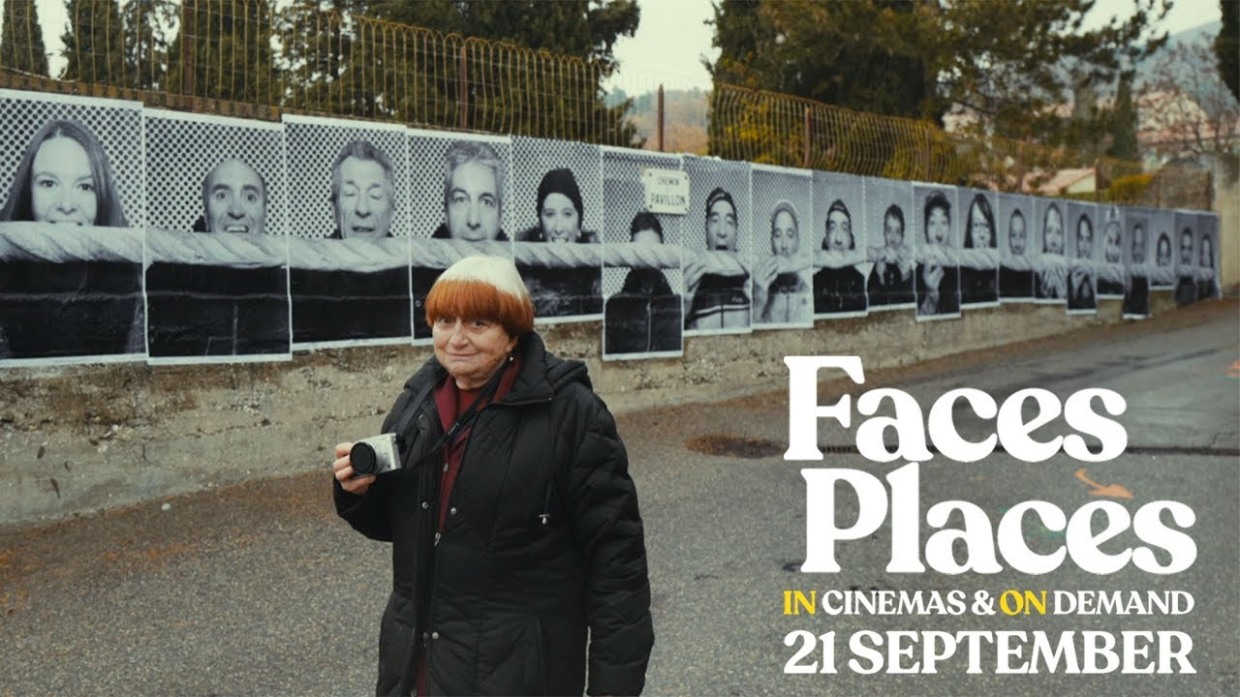 Their larger than life photo prints are then pasted onto buildings or open places for everyone to view, evoking the shared joy of living, working, and the collective memory of a meaningful past. Like this one with photos of pioneer miners pasted on a row of dilapidated homes slated for demolition in a miners’ community. The one remaining homeowner who refused to vacate her house was moved to tears upon seeing the completion of the project.

Art undefined and unconfined, once pasted onto these surfaces, JR’s black-and-white photographic images convert the whole building or structure into an art form. The world is his canvas. Unlike Banksy, JR is transparent with his creative process, and lets the public view his work in progress. A TED Prize winner (2011), his large-scale, participatory art projects are installed all over the world, albeit sometimes illegally according to local laws, but the people welcomed him.

At age 89, Agnès Varda became the oldest nominee in Oscar history when Faces Places was nominated for Best Documentary for the 2018 Academy Awards. It’s now on DVD and Blu-ray. Her numerous older works may not be accessible for us so readily. Check your streaming or on demand services. I was able to watch two of her excellent films Vagabond (1985) and Cleo from 5 to 7 (1962, click on link to my review). Don’t miss this short clip on IMDb “Agnès Varda in Memoriam”.

The soul-stirring original music by Matthieu Chedid complement the meaningful duo collaboration. At the beginning, JR talks with Varda to organize the making of their joint project. We see them exchange the following dialogues:

AV:  What I like was meeting amazing people by chance.

JR:  So you want to carry on that way, with no plan or itinerary?

AV:  Yes. Chance has always been my best assistant.

JR:  Do you think chance will work for both of us?

From the film, we can see chance had worked for both of them marvellously.

Paris in July is hosted by Tamara at Thyme for Tea

Other Paris in July 2019 Posts on Ripples:

Pictures at an Exhibition

‘A Sunday in the Country’ is an Impressionist Cinematic Painting

Summertime… and the viewing is nostalgic. On a lazy, hazy summer afternoon, what better way to spend your time than to catch up on classic films that you’d missed through the years, or, rewatch them. Sure, a glass of pink lemonade and some chocolate-dipped madeleines would add to the enjoyment.

Here’s a wonderful film by the venerable Belgium born French director Agnès Varda, who turned 90 on May 30 this year. Just exactly what she was doing a few weeks before her 90th birthday?

On May 12, Varda joined Cate Blanchett in leading 82 female industry figures to walk up the stairs on the red carpet at the Cannes Film Festival, a silent protest symbolizing the challenges women face in climbing the industry ladder. Blanchett gave a speech in English, Varda in French.

Cleo from 5 to 7 (Cléo de 5 à 7) is a 1962 film by Varda, a Cannes Palme d’Or nominee the next year. The story takes place on one single day in the life of a popular recording singer Cleo (as in Cleopatra) who loves everything beautiful looking. But early in the day she receives all sorts of bad omens about her health. Her zest for life fizzles through the day as she would be calling her doctor to find out the result of the medical test she’d taken a couple days ago.

We follow Cleo on the longest day in 1962, yes, that’s the first day of summer, which could have brought her vitality and joy. How does the fear of illness and mortality affect the beauty-seeking and fun-loving Cleo? It totally changes her outlook. Instead of being cooped up in her apartment with musicians rehearsing her songs, she steps out into the streets of Paris to escape the gloomy sense of despair.

Don’t worry, this is not Sarte or Camus. Cleo is just a gal seeking to be loved, and for the first time in her life, fearing for her own mortality. Varda takes us along the streets of 1962 Paris, and offers us naturalistic scenes of cafes and roadside buskers, and leads us into an art studio as Cleo looks for her friend who works as a model for sculptors.

Finally, she’s alone in a park, the serene, meditative milieu is the ideal setting for her to meet Antoine. The encounter is the magic she needs. The rest you ought to see it for yourself. Varda’s pace is leisurely, her viewpoint insightful, and the ending is satisfying. Maybe by now, Cleo learns the difference between beautiful-looking and beauty.

The original music is soothing and cooling for a summer day, composed by Michel Legrand (who is the piano player in the movie). Legrand is a three times Oscar winning French film composer. Which three times? Yentl (1983), Summer of ’42 (1971), The Thomas Crown Affair (1968).

As I said, summer is the best time for nostalgic viewing.

Paris in July is hosted by Tamara of Thyme for Tea, an annual summer blogging event.