Here are the ten movies you might like to watch before the 83rd Academy Awards on Feb. 27:

For a complete list of nominees and to watch the announcement from this morning in case you missed it at 5:30 am (PT) or 8:30 am (ET), CLICK HERE. 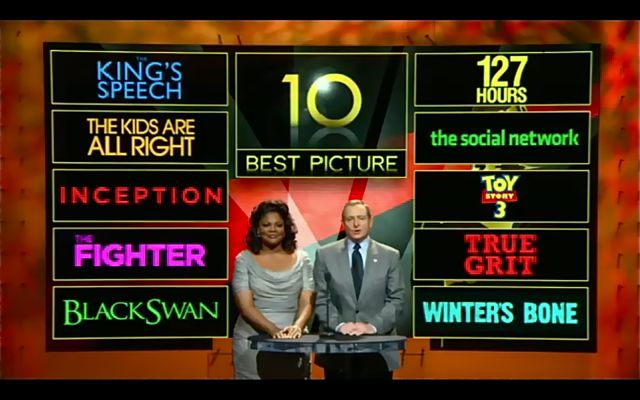 The surprise here is True Grit.  The Coen brothers’ film got snubbed at the Golden Globes and comes back with a vengeance.  Two years in a row they get the nod for Best Picture, after last year’s A Serious Man (my review here).   True Grit is a remake of the 1969 Western for which John Wayne got his Oscar.  Here we have a distinct Coen style film with smart dialogues and great acting.  “Nothing is free except the grace of God,” the beginning voice-over says, matched with the tune of the old hymn ‘Leaning on the Ever Lasting Arms’… I was amused to see how these two notions echo at the end of the film. At 13, Hailee Steinfeld beat out 15,000 other girls in the audition to get the role of tough and articulate Mattie Ross, seeking justice for her daddy’s death.  Now one year later, she has landed at the Oscars. Amazing. Also, Jeff Bridges gets the nom again, after snatching the Best Actor Oscar from Colin Firth last year.  It’s interesting to note that, while Colin Firth can act with half a voice, Jeff Bridges here shows us he can act with just one eye.

I’m excited to see Mike Leigh finally getting recognition for his poignant original screenplay for Another Year.  Unfortunately, the film does not get any more Oscar nods.  Veteran British actors Jim Broadbent, Ruth Sheen, and Lesley Manville give a performance of deep resonance.  Lesley Manville is no less deserving than anyone on the list of Best Actress nominees.  This is one of the most neglected movies of 2010.  I saw it at the Calgary Film Festivals last year.  I know some cities are just showing it now. Don’t miss it.  CLICK HERE to read my review.

Toy Story 3.  The animated feature that gets into the major league, following the only two other animations ever to be nominated in a Best Motion Picture category, Up (2009) and Beauty and the Beast (1991).  The theme of growing up and parting with your beloved and familiar finds its way into a touching animation that may well appeal to parents more than kids.  The idea of a child leaving home for college has been used in several movies in recent years, most notably, The Blind Side (2009) and The Kids Are All Right (2010).  I’ve watched all of this year’s ten Best Picture nominees. But, don’t laugh, Toy Story 3 was the only time I’d shed a few tears.

For Best Documentary Feature, I’m glad to see our notorious graffiti artist Banksy’s film Exit Through the Gift Shop has not evaded the Academy.  To read my review CLICK HERE.

The Academy Awards will take place on Sunday, Feb. 27.  This time Anne Hathaway and James Franco (a Best Actor nominee himself for 127 Hours), the youngest of Oscar hosts, are set to offer a fresh new look.  Hathaway had proven her versatility dancing and singing with Hugh Jackman two Oscars ago, and Franco has been hailed as the new Renaissance Man…  Just hope they will live up to expectations.

Update Jan. 25: Mike Leigh is nominated for an Oscar for Original Screenplay.

Update Jan. 18: Another Year is nominated for a BAFTA for Outstanding British Film of the Year, and Leslie Manville for Best Supporting Actress.

“Ah, look at all the lonely people.”

Every Day, Another Year, film titles like these evoke the oblivious passage of time, and the human experiences that float down the stream of life. The kind of films we would find in art-house cinemas, not your fast-paced action or effects-generated spectacle.  Another Year would gratify one’s need for slow ruminations and offer one time to savour the dynamics among characters.  The film was on my ‘must-see’ list at the Calgary International Film Festival 2010, which ended last weekend.  It had met all my expectations and offered more. 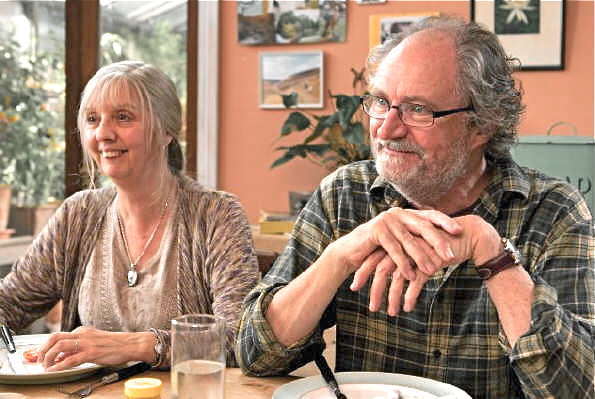 What’s more is the excellent performance from a high calibre cast of British actors.  Their nuanced portrayals of characters convey emotions unabashedly, but in a deep, restrained and unsentimental manner.  That is what makes Another Year so satisfying.  I enjoyed it much more than director Mike Leigh’s previous title, equally acclaimed Happy-Go-Lucky (2008), in which Poppy (Sally Hawkins) the happy gal is just a bit too loud and even obnoxious for me.  While here in Another Year, Tom and Gerri are the happy couple whose relationship is one of mature, quiet and gentle bliss, compassionate towards themselves and others.

Framed in the passing of the four seasons, the film explores the realities of life: ageing, loneliness, death, love, marriage, friendship… Yet the occasional animated and humorous renderings of the characters allow a lighter way of handling the subject matters.

Gerri (Ruth Sheen) and Tom (Jim Broadbent) are a happily married couple living in London.  In the midst of the bustling city, they have their own plot of land close by their home where they work hard to grow vegetables. They bring home fresh produce to cook healthy meals and entertain guests.  Their vegetable garden is an apt metaphor for the love they cultivate in their relationship despite the busyness of everyday life. Tom is a geologist and Gerri a counsellor in a medical office. If there’s any pun intended here with their names, it would be for the very opposite effect that they are a harmonious pair whose relationship has attracted those less happy to cling on for stability and support.

But why Tom and Gerri gather such damaged and dependent friends the film does not explain.  What we do see is a most gracious couple extending their lives to them. Through their interactions, we see the contrast. While we admire the almost perfect marriage, we ache for the singles, sad and lonely… as we see them in this film.  I trust the director is making a specific rendering and not a generalization on singlehood.  The contented Poppy (Sally Hawkins) in Happy-Go-Lucky (2008) is the best spokesperson for the single league.

Tom and Gerri have an adult son Carl (Martin Savage) who frequently comes home to visit his parents from a nearby town by train. When I saw the shot of a commuter train going past on screen, it flashed upon my mind the image in Ozu’s works.  That is one of the Japanese director’s signature shots, a train passing through, and his favourite subjects also being family, marriage, nuanced interactions.  I thought, if Ozu were an Englishman living today, this would be the kind of films he would make.  And lo and behold, I found this tidbit of trivia on IMDb: One of Mike Leigh’s top 10 films of all time is Tokyo Story (1953).

If one is to find fault with Another Year, it could be the very fact that Tom and Gerri’s marriage is just too perfect. But with all the ubiquitous dysfunctional families we see represented in movies nowadays, Leigh might have opened a window to let in some much needed fresh air. Tom and Gerri make an ideal contrast to what we have so sadly gotten used to seeing in films.

There are excellent performances from the veteran actors, but one stands out. Lesley Manville’s animated portrayal of the vulnerable Mary deserves an Oscar nomination. The most impressive shot comes at the end. Without giving it away, let me just say the ending shot lingering on her face and the ultimate fade to black is poignant and most effective. Of course, it’s acceptable to applaud after a festival screening. And so we did, appreciatively, a much needed channel for a cathartic response.