Often I find some books are better read together, back to back. They have similar settings or subject matter, and it’s always interesting to see the different perspectives and connections, intentional or not. A testimony to the six degree of separation.

Here are a few. Can you name some more from your reading experience?

Pachinko by Min Jin Lee and Forgiveness by Mark Sakamoto

Pachinko is a family saga set in a period of history that’s seldom told in North America, the first part of the 20th century in Korea and Japan. Annexation of Korea is to put it mildly, prelude to the Pacific War later when the Japanese army invaded her neighbouring countries during WWII. The sufferings of those in the frontline and those at home are vividly depicted in Sakamoto’s family memoir: his maternal grandfather as a prisoner of war in Hong Kong and later shipped to Japan as slave laborer, while his paternal grandmother and her family mistreated in internment right in their homeland of Canada. (detailed reviews coming up)

Barne’s biographical vignettes of Russian composer Dimitri Shostakovich during Stalin’s reign is like a compendium to Madeleine Thien’s Do Not Say We Have Nothing which depicts the three choices one can make when confronting a ruthless, totalitarian Ruler. Thien’s fictional characters struggled to survive during Mao’s cultural revolution and the subsequent years. Speak truth to power, unfortunately, is not a viable alternative. Death and oblivion will be the certain and swift consequences.

Nutshell by Ian McEwan and Hamlet by William Shakespeare

McEwan’s modern day, in utero version of the Bard’s incestuous mayhem. Very perceptive, considering its from the voice of a baby in the womb.

Circling the Sun by Paula McLain, West With the Night by Beryl Markham, and Out of Africa by Karen Blixen

Don’t think of the accented Meryl Streep in the movie Out of Africa, just imagine the ‘real’ Karen Blixen, on her farm in Africa, a tough woman on her own most of the time, and then there’s an acquaintance (can’t say friend) Beryl Markham, a female aviator, equally pioneering, a Brit expat in Africa, doing more than the discovery of the land but also of the man in Karen’s life, no, not Robert Redford.

Mrs. Dalloway by Virginia Woolf and The Hours by Michael Cunningham

One day in the life of Mrs. Dalloway can have so much meaning under the pen of Virginia Woolf. The Hours are equally perceptive, internal depiction of three women in different periods of time. And throw in The Hours the movie after, an excellent adaptation and hauntingly worthy of Woolf’s literary style.

The Portrait of a Lady by Henry James, Mrs. Osmond by John Banville, and Middlemarch by George Eliot.

Mrs. Osmond is Banville’s imaginary sequel to Henry James’s The Portrait of a Lady. Seems it all point to bad choices when the protagonist naive and a little too idealistic. I’m exploring how George Eliot’s Middlemarch may be a precursor to these novels of the young and restless and marital mismatch.

And here’s an invite, Middlemarch in May (makes a nice hashtag) is a read-along I’ll be joining with Bellezza and other readers. It starts in May, and it’s our intention to finish before summer, hopefully. Feel free to join us and explore the Dorothea Brooke connection to Isabel Archer, and I’m sure other delights as well along the way.

I’ve read several books in recent months that are good evidence of ‘six degrees of separation’, and I’ll just end with four here. But more crucial is why such content at this time? They are all published in 2016 but still enjoy current bestselling positions. All are similar in their historical backdrop, authoritarian dictatorship in the 20th Century in two neighbouring countries, China and Russia. Or, maybe these writers of our time are indeed prophetic voices to stress that eerie caution: “Those who don’t know history are doomed to repeat it.”

Here’s the sequence of my reading:

Do Not Say We Have Nothing by Madeleine Thien

The top selling book in Canada according to CBC Books, Madeleine Thien’s exceptional novel of three characters, musicians at the Shanghai Conservatory of Music during the Cultural Revolution in China, leads us through decades of contemporary Chinese history from the Communist takeover after WWII to Mao’s Cultural Revolution to the 1989 Tiananmen Massacre, spanning generations and across two continents. Thien was teaching creative writing when her program was abruptly cancelled in the aftermath of the ‘Umbrella Revolution’ sprouting from the Occupy Central led by teenaged students in Hong Kong. That was a motivating force propelling the writing of the book. Following the most recent news that four young student leaders are given months of jail sentences for their actions, we know how timely a voice Thein is with this book.

Dimitri Shostakovich’s music is in the minds of the three musicians at the Shanghai Conservatory of Thien’s book. Shostakovich, himself a composer treading a precarious line between authenticity and self-preservation under Stalin, is an apt parallel of the situation the trio have to face.

Julian Barnes has crafted an imaginary biopic of Dimitri Shostakovich during Stalin’s tyrannical rule in the Soviet Union (1929-1953). Barnes’ depiction is internal, presenting the struggles, the giving-in and the self-loathing of a world famous composer and pianist who was unable to stand up to a ruthless and manipulative dictator. Speak truth to Power? Who can still stand, or live, after that? And it’s not just about oneself, but one’s family and all those associated.

Cometh the Hour by Jeffrey Archer (#6 of the Clifton Chronicles)

Jeffrey Archer, a prophetic voice? While his Clifton Chronicles have entertained us with imaginary characters spanning three generations of two British families, Archer does have the political mood of our times firmly held under his pen, and Lord Archer is a savvy political historian in his own right. This summer I binged on Jeffrey Archer, okay, not exactly your serious, prophetic voice, but no less relevant. This is especially true when his fictional character, Russian writer Anatoly Babakov, is imprisoned in Siberia for his book Uncle Joe. Based on his own experience while working under Joseph Stalin, Babakov offers readers an insider’s look into the ruler, revealing the ruthless dictator that he really was.

Babakov is awarded the Nobel Prize of Literature while still in prison. But not long after the announcement, he dies of a heart attack. His wife Yelena although escaped out of the country, wants to return to honour her husband. Archer’s character makes me think of the real life dissident Chinese writer and activist Liu Xiaobo, also Nobel laureate, but was denied the freedom to go and accept his Prize. He had been imprisoned for 11 years and sadly, died of liver cancer in July this year, 2017. And even more sadly, Liu’s wife could not see him at his deathbed and had gone missing after his death. Archer’s book was published in 2016. I’d say that’s quite prophetic.

A Gentleman in Moscow by Amor Towles 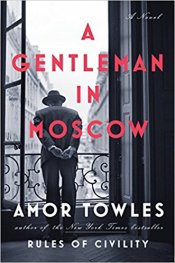 A totally different tone, but the same historical backdrop. Towles has created an interesting and colourful character, the aristocrat Count Alexander Rostov, kept in house arrest when the Bolsheviks overrun the country. True to his personality and lifestyle – the major consolation of such a misfortune – Count Rostov serves his house arrest in the elegant Moscow Metropol Hotel across from the Kremlin, albeit in a cramped room in the attic. With his always pleasant demeanour, the former aristocrat makes himself at home at the grand hotel, meeting interesting characters, wine and dine to his heart’s content. He stays there for decades, with the historic changes happening outside the four walls of the Metropol: Lenin, Stalin, post-Stalin, and further. As fate would have it, Count Rostov encounters an idealistic youngster named Nina, and years later, takes up guardianship of her daughter Sofia, and thus his life and view begin to turn into something more purposeful. The Metropol makes me think of Wes Anderson’s The Grand Budapest Hotel. Instead of speaking truth to power and get slapped in the face or worse, Count Rostov thinks of an ingenious scheme to beat Power at their game. If I were a filmmaker, this is one to bank on.

Do Not Say We Have Nothing Book Review