This is my fourth and final instalment for Ireland Reading Challenge 2012 hosted by Carrie of Books and Movies. What first attracted me to this newly published edition (August 2012) by Modern Library was its cover. I’m very fond of Modern Library’s classics in trade paperbacks, mainly because of their elegant covers as well as the size of the type. Interesting how type size has become a factor for my reading enjoyment in recent years… ok, no more elaboration on that.

While Joyce’s later works Ulysses and Finnegans Wake are considered iconic works of 20th C. literature, for some reasons I have no desire to take up the formidable challenge of deciphering them. But Dubliners, a collection of short stories written in his early 20’s, looks to be a much more manageable task. 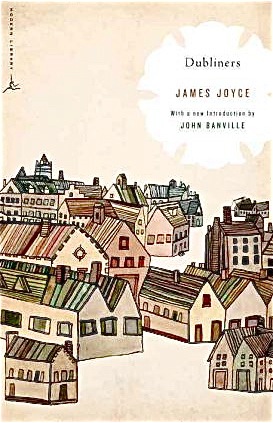 With this new edition comes a new introduction, written by the Booker Prize winning author John Banville (The Sea, 2005). For me, two points stand out in his introduction. First is that Joyce himself had indicated that Dubliners could well be his best work. An admission that he might not have wanted to be publicized.

Second, Banville has slipped into a sentence an implied definition of ‘greatness’ in a literary work. Here’s it is, as he talks about the story “The Dead”:

It is indicative of the greatness of this story that after nearly a century of critical commentary and scholarship dissection it remains an enigma.

If the inscrutable is used as a qualification of greatness, then there are a few great ones in this collection.

Dubliners compiles fifteen short stories. In order of their arrangement, they cover the point of view of childhood, adolescence, to adulthood, yet they share similar themes based on love and loss, life and death, religion and conscience. It’s interesting as I caught myself while reading that I did not see the characters so much as residents of Dublin. They appear borderless. Their particular location and life situation might be tied to Dublin and Ireland at a certain point in time, but the issues they have to deal with transcend boundaries.

A twist that the stories seem to share is: people are not what they appear. Often, the picture presented in the first part of a story leads to an ironic ending. Further, below the surface of a character, there are unfathomable depths of feelings, conflicts, memories, longings and desires. Joyce’s superb writing takes the reader with him as he peels off layer after layer to show us the human soul… but not devoid of charm and humour.

Most of the stories are swift and short, some maybe like scenes and vignettes, their descriptions and character depictions sharp, precise, and succinct. The last one ‘The Dead’, the one that Banville notes as an ‘enigma’ in the introduction, is the longest with 55 pages, the highlight of the whole book.

Here are my favourites:

An Encounter – sometimes a most unlikely stranger can help us see ourselves a bit more clearly.

Araby – famous story that many of us might have read in school, adolescent infatuation, missed chances and the uncontrollable happenings in our everyday life.

Eveline – One may feel discontent with one’s claustrophobic life, but given the chance to escape, freedom may just be too risky a choice to make.

A Little Cloud – Yes, the grass is always greener on the other side, but some people may just be destined to stay in less green pastures… Our lot, is it by fate, or, by choice?

The Dead – A 55 page and by far the most gratifying story for me. Joyce sets the stage with a Christmas party and presents some lively characters, slowly focusing on Gabriel, a loving husband, and maybe drenched in a bit too much self-importance and confidence.

All’s well until the twist comes at the last 10 pages. A song at the party resurrects his wife’s memory of a young lover who died for love of her at 17. As the husband excavates his wife’s long past story, he comes to a humbling self-realization. His initial passionate sentiments for her change to jealousy but finally turn into a greater clarity of what love is.

I must quote this last sentence of the story, don’t worry, no spoiler, I’ve already given you that, but just for the beauty of the prose, and the meaning that runs silent and deep:

His soul swooned slowly as he heard the snow falling faintly through the universe and faintly falling, like the descent of their last end, upon all the living and the dead.

Here is my take on this ‘enigma’ of a story…

as the snow falls upon all
it is love that connects
among the living
and with the dead.

My other reviews for Ireland Reading Challenge 2012:

The Importance of Being Earnest by Oscar Wilde

Everything in this Country Must by Colum McCann

18 thoughts on “Dubliners by James Joyce”