This is a sequel to my last post, Book Review of The Namesake by Jhumpa Lahiri.  These back-to-back write-ups form my second instalment for the Read the Book, See the Movie Challenge over at Ready When You Are, CB.

“If it weren’t for photography, I wouldn’t be a filmmaker.  Every film I make is fuelled by photographs…. Photographs have always helped me crystallize the visual style of the film I’m about to make.”

And photography has brought to life the poignant novel The Namesake.

This is a perfect match.  The Namesake film adaptation is privileged to be crafted in the hands of the accomplished director Mira Nair, and its screenplay written by the multi-talented Sooni Taraporevala.  Both born in India the same year, grew up and educated there, later both had attended Harvard.  After earning her Masters at NYU majoring in Film Theory and Criticism, Taraporevala moved back to India and pursued a successful career in photography and other artistic endeavours. Mira Nair went on to become an acclaimed filmmaker and professor of Film at Columbia University.  Nair and Taraporevala collaborated on several films that have garnered international nominations and awards, including Cannes, Venice, BAFTA, and the Oscars.

The pair could have been characters taken right out of Jhumpa Lahiri’s stories.  They must have known from personal experience the realities of Lahiri’s stories, the feelings of being transplanted, the quest for identity.  As a result, they have effectively brought into visualization the internal worlds of Ashoke, Ashima, Gogol and Moushumi.  It is interesting to hear Nair describe herself as “a person who lives in many worlds”.  Every immigrant is at least a bicultural being.  Our postmodern world has only made it more and more viable to navigate across boundaries and sustain multiple identities.  The Indian meaning of the name Ashima could well have spoken to such a modern day phenomenon: without borders.

From this perspective, Nair is the best person then to take what could have been just another “ethnic movie” to a universal plane.  She has created a colorful rendition of a human story for us to enjoy.  You don’t have to be Bengali to appreciate the Ganguli saga.  Elements such as love, marriage, parent-child relation, expectations, self-fulfilment and its obstacles, the search for one’s place in the family and the world, these are all situations we can relate to.   It’s just now the issues have been explored from a different frame, offering us an alternative perspective. 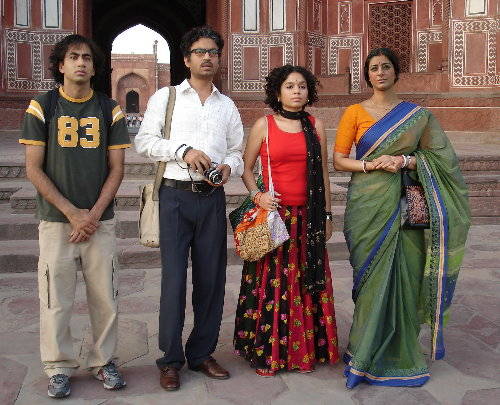 I have appreciated the quiet development of love between Ashoke and Ashima despite their arranged marriage.  Their intimate husband and wife relationship is sensitively played by Irrfan Khan (Slumdog Millionaire, 2008) and the model and award-winning actress Tabu, an excellent choice in casting.  I particularly admire Tabu’s gentle and elegant poise.  It’s interesting to see how the two exchange deep sentiments by wordless, nuanced expressions and body language.

The treatment of the story in the hands of a visual artist understandably would be quite different from its original literary form.  Instead of the sombre tone, Nair has given the story a lively adornment, sustained by animated characters.  Nair’s Gogol is a more outgoing young man than that from the book, and I’m fine with that.  Kudos to Kal Penn’s portrayal of  Gogol/Nick Ganguli, an interesting performance fusing youthful energy and wistfulness at the same time.

Yes, that’s Kal Penn of the stoner movies Harold and Kumar fame (2004, 2008, and coming 2011) A much more serious role here in The Namesake.  A lively Gogol is only natural and fun to watch, for he is an American born young man who just wants to belong.  So we see him being impatient with his father’s restrained and non-communicable composure, we see him playing air guitar to loud music in his room, we see tender moments when he teases his younger sister Sonia, or the natural comedic look on his face, culture shocked during his family trip back to Calcutta, and we see his romance with Maxine (Jacinda Barrett, New York, I Love You, 2009), the American girl who is so oblivious to the cultural baggage he is carrying.

But Kal Penn has earned his role.  He wrote to Nair earnestly seeking for the part, telling her that The Namesake is his favorite book and often times, he would use the pseudonym Gogol Ganguli to check in hotels.  Some method acting, who’d have known he’s in character all along.

The bonus with watching a DVD is of course the special features.  The Namesake is a keeper if you’re into the creative process of filmmaking.  My favorite featurette is The Anatomy of The Namesake: A Class at Columbia University’s Graduate Film School in which Nair and other crew members engage in conversation with film students about the making of the movie.  Other wonderful featurettes include Photography as Inspiration, and Fox Movie Channel interview In Character with Kal Penn.

Overall, a faithful adaptation of Lahiri’s book, offering an entertaining, visually inspiring rendition of a story deserving to be seen.