For the tenth year, I’m sharing a Christmas read here at the Pond. For the first time, it’s a book written for young readers but is ever so relevant for us grown-ups. Herein lies the ingenuity of writer Madeleine L’Engle. Time to dig out that copy that you might have read when you were a youngster. If you haven’t read it, now’s a good time. 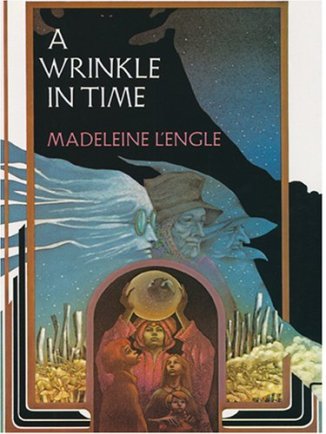 Newbery Medal winner A Wrinkle in Time is the first book in the Time Quintet series of fantasy YA fiction about the Murray family, scientist parents and four children Meg, twins Dennys and Sandy, five year-old genius Charles Wallace, and that special friend of Meg’s, Calvin O’Keefe. The deceptively simple odyssey in time and space is packed with wonder and wisdom.

The book not only exudes insights but shows L’Engle’s remarkable foresights. Take this for an example, dematerializing and materializing  for easy transport. Published in 1962, the book came out four years before Scotty beamed Kirk up using the same method in the first season of Star Trek.

Or this fancy idea, ‘tesseracting’, that is, travelling through space and time via a wrinkle in time. The shortest distance between two points is not a straight line, but through a wrinkle when two points are folded. That’s fifty years before Christopher Nolan sends Matthew McConaughey interstellar travelling.

All concepts held in a simple plot. Meg, Charles Wallace, together with friend Calvin, go on an interstellar quest to look for Meg and Charles’ physicist father who had gone missing for almost a year while doing some classified scientific work for the government. This little, unequipped search party is initiated and aided by three celestial beings: Mrs. Whatsit, who’s much wiser than she appears, Mrs. Which, who doesn’t bother materializing but remains as a shimmering beam, and Mrs. Who, who speaks in quotes.

The more a man knows, the less he talks.

Their odyssey brings them finally to the planet Camazotz, where they find Mr. Murray confined by the evil Dark Thing, or IT (Surprise! 24 years before Stephen King’s book and now movie) The smart alecky Charles Wallace is easy prey and quickly influenced by IT. (And for Luddites, what better parallel to address our technology now, the evil IT) Ultimately, it’s Meg, our reluctant and timid heroine, who has to be the one to go fight IT to rescue her little brother.

Meg knows Charles Wallace is not himself but trapped and deceived, and must be snatched from the evil force IT. She has just one weapon as her ammunition, given to her by Mrs. Whatsit, that one thing IT doesn’t have: LOVE. With her single act of bravery, she brings the family together again.

When I was a child, I read like a child, I thought like a child. When I became an adult, I can read like a child and like an adult too. That’s the joy of reading A Wrinkle in Time. One can find pleasure in the adventure and feel the vulnerability of the children, as well delve deeper into its symbolism and parallels, and ponder its layers of meaning.

L’Engle writes to the child and the adult in us. She can convey scientific and spiritual concepts at the same time and in a way that both young and old (and those in between) can enjoy. There’s no conflict between the cerebral and the spiritual; they co-exist comfortably in L’Engle’s work. Not only that, they fuse together and from that alchemy rises a whole new, inexplicable entity: Faith.

That first Christmas day when a baby was born in a lowly manger, the war against IT had started to win. Although the last, painful battle on the hill of Calvary had not been waged, the outcome was cast, just because LOVE came.

And the light shineth in darkness; and the darkness comprehended it not.

‘Tis the Season to read or reread A Wrinkle In Time before the movie adaptation comes out in 2018. Helmed by Selma (2014) director Ava DuVernay, screenplay by Frozen (2013) scriptwriter Jennifer Lee, with some stellar beings including Rees Witherspoon, Oprah Winfrey, Mindy Kaling, Chris Pine et al.

Past Reading the Season Selections:

2011: Walking on Water by Madeleine L’Engle

2008: The Bible and the New York Times by Fleming Rutledge

17 thoughts on “Reading the Season: A Wrinkle in Time by Madeleine L’Engle”