Thanks to the 1920 Club, I’ve the chance to explore the short stories of F. Scott Fitzgerald. After reading his debut short story collection Flappers and Philosophers which was published in 1920, and now that the week of the Club read has passed, I continue with seeking out more of FSF’s works published in subsequent years.

As I can’t go to bookstores now, I turn to my shelves to see what I have in my stockpile, and unearthed this one which I’ve never read: A designer’s copy of FSF’s short story first published in 1922, The Curious Case of Benjamin Button, in hard cover and fully illustrated, a thin little gem hidden between thicker books. Illustrated by Calef Brown, published by Collins Design, NY, in 2008 when the movie adaptation came out.

What could have motivated Fitzgerald to write a story about a baby born as an old man then gradually grows younger and younger, creating an imaginary scenario that’s opposite of the human trajectory? FSF’s reply had been cited as thus:

‘This story was inspired by a remark of Mark Twain’s to the effect that it was a pity that the best part of life came at the beginning and the worst part at the end.” FSF seems to be offering a hypothetical answer with a question: Is growing younger necessarily more cheerful than growing older?

All along I’m aware of the premise of the story. So with much curiosity I open and read it through. 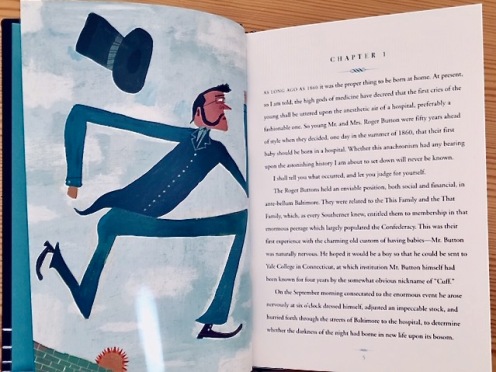 First off, no need to use logic or your rational mind to wrap around this scientifically impossible happening. Just take it as a fantasy and let curiosity be the guide. The setting is 1860 and forward in Baltimore. Benjamin is born to Mr. Roger Button, president of Roger Button & Co., Wholesale Hardware, a well-off businessman and a respected figure in the community.

The baby is born with a long beard, “a man of threescore and ten”, in other words, 70 years old, with a ready-formed personality and full mastery of speech to communicate with his dumbfounded father, whose immediate reaction is this:

Mr. Button, sank down upon a chair near his son and concealed his face in his hands. “My heavens!” he murmured, in an ecstasy of horror. “What will people say? What must I do?”

Have you caught it? Indeed, what he’s worried is what people will say about this horrifically different offspring of his.

What follows is a story, while whimsical, is quite sad. Mr. Roger has trouble accepting this undefined being in his home. Fitzgerald’s storytelling is light humour with an acerbic tone. His father calls him Benjamin, albeit a more appropriate name in his mind at first was Methuselah. Benjamin ‘grows up’ being ostracized due to age disparity among his peers, barred from Yale University for his advanced age (I’m sure by now the system has changed). One good thing is, later he does find a young woman to marry, Hildegarde Moncrief, daughter of a general, for by that time the age gap though still large is overcome by love.

But as years go by, as Benjamin becomes more youthful and Hildegarde much older, he begins to grow tired of her, and their relationship deteriorates. Some years later, he has  turned so youthful that his son feels uncomfortable to be seen with him and his grandson surpasses him in intellect. Eventually, Benjamin degenerates into a state without memory, a baby that responds to mere instinctive urges. Despite the lively book illustrations, this is actually a very sad story.

This curious case reads like a cautionary tale of Ageism that applies both ways: one can be discriminated for being too old, or too young. Fitzgerald could well be using a fanciful tale to depict the norms of social acceptance which seem to be strictly dependent on appearances. Further, in response to Mark Twain’s comment that first prompted the story, Fitzgerald seems to conclude that what an old man has but a baby doesn’t is the wealth of memory he has stored throughout the years. Without an iota of memory, does that make it ‘the best part of life’?

A cautionary tale? Maybe. A whimsical literary farce? That too. Definitely something that’s very different from FSF’s other realistic stories of the Jazz Age.

13 thoughts on “‘The Curious Case of Benjamin Button” by F. Scott Fitzgerald”